The last time we had a nice big round number come around on the timeline of history, I ranted about the world before & after WWI. Much as that event burned a black path across Western Civilization, there’s a much bigger round number, with much bigger impact, coming around in October. Better get my $.02 in before anybody else.

According to legend, October 31st, 1517 is when Luther nailed his 95 feces to the church door.

I hope I don’t need to tell you much about what this set off in Europe for the next couple of centuries. Just Google a few fun things like “Reformation”, “Siege of Munster”, “30 Years War”, and “Witch Trials”.

I’m likely to piss off a few Christians with my first observation: that the content of his 95 theses and the subsequent debate over them are the LEAST interesting part of all this to modern people. Some day, future humanoids will look back on the ideological battles of the 20th century (the Cold War, for instance), and laugh as heartily as we do over indulgences and transubstantiation. (Assuming humanoids stay around that long, but that’s another essay.)

Meanwhile, let me just point out why this might have been so important to the people of that time. Go back to my rant about WWI. In a time in which life was, with rare exceptions, short and miserable, fear of death wasn’t what it is to us. It took a bit more than the threat of death to keep people in line. It took a threat of ETERNAL punishment and a promise of ETERNAL reward to motivate a lot of people, and the occasional auto-da-fé to illustrate. 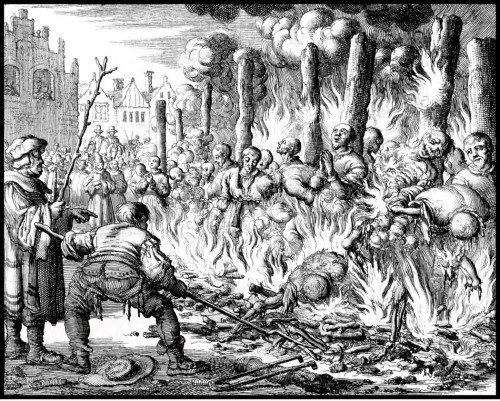 Reason and respectful debate require a certain minimum of comfort to flourish.

The MOST interesting part of Luther’s bold act is what made all this happen: Gutenberg had developed printing with movable type abou 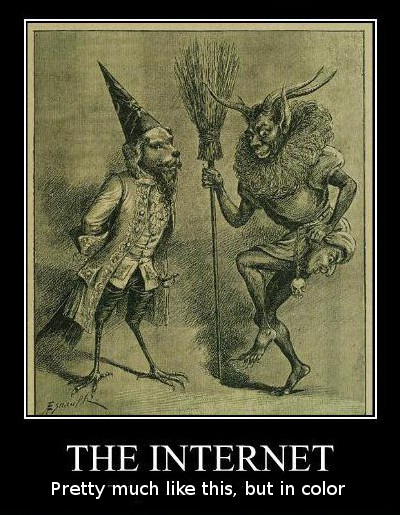 t 70 years before Luther, enabling all kinds of uncontrollable ideas to spread. I’m not, by a long shot and some decades, the first to observe that the internet will make changes in our own society comparable to what Gutenberg did, and we’ve only seen the earliest stages of it. Religious wars, pogroms, and witch trials can in large part be blamed on the fact that almost any idiot with a small budget could have a pamphlet printed.  So could great advances in the arts and sciences. So could a proliferation of hoaxes and just plain humorous nonsense. Sound familiar?

The Roman Church was ill-adapted to answer Luther and other critics. It was used to having a near-monopoly on mass communication up to that time. For several centuries before that, the bulliest pulpit was quite literally the pulpit. Illiterate people got most of their news and commentary about the big world outside one’s own village that way. 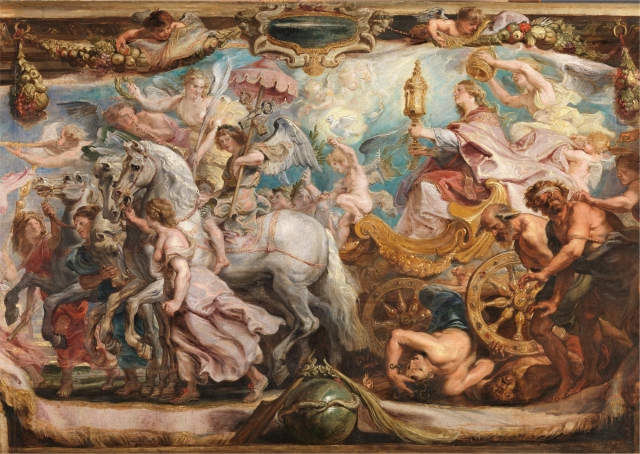 Triumph of the Eucharist, by Rubens

are some of the most revered works of art in the world, but it couldn’t stop the social forces un 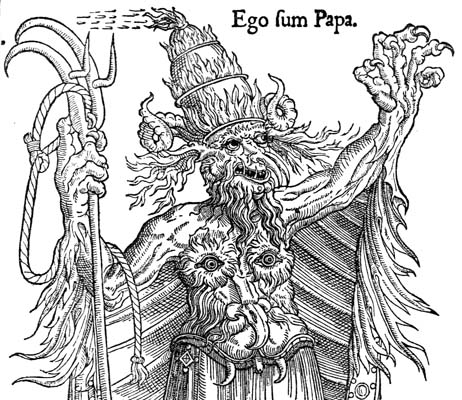 leashed by the printed page and an increasingly literate populace.  A simple meme could often say more, to much more people, than the most elaborate architecture and statuary.

Now, if we want to consider what to expect of our own
future from the internet by making analogies, remember
that we had a little foretaste of it in the 20th century, as radio, film, and sound recording made a smaller, but
significant, jump in mass communication. If you have some leisure time, here’s a little background stuff to get a feel for just what radio and film meant:

The first link above is about film, a much more expensive medium that had to be aimed at lowest-common-denominator entertainment to make back production costs. Those costs also meant that it was controlled by much fewer people.  Radio, on the other hand (the second link) made it much easier for someone with a more humble budget to put any old shit out there, and they did. The internet is, of course, much more analogous to the latter.
Lets cover a few of the salient features of this new medium:

(1) Text, sound, video, color, and easy editing thereof make it easy to put just about anything out there with no budget to speak of. It’s also very easy to fake things.

It astounded me that the msm paid any attention at all to James O’Keefe’s videos of ACORN and Planned Parenthood. The only way I can explain it is that people in the old media were very naïve about how easily digital video could be edited.  Somehow, it never occurred to them to wait for the unedited files before the story was put out. But we know why they published without thinking: FOMO (fear of missing out) is a prime motivator for any news organization. Anything that will grab eyeballs is automatically considered imperative.

Time to remind everyone of the first law of the internet, or any kind of communication, really:

The effort required to refute bullshit is an order of magnitude
greater than that required to create it.
(Various wordings and attributions are floating around.)

It’s what makes fake news so effective. The old media establishments are ill-adapted to controlling this.

(2) Many individuals, hired or not (or even bots), can drown out any comment stream or message board with partisan comments.  A little study of certain subreddits or 4chan boards should make it clear how difficult it can be to get real, credible information the exposure it needs when everyone has an agenda, everyone has a voice, and some will post anything, whether they believe it or not, just to be saying something or to see what reaction they get (known as “shitposting”).

(3) It’s very easy to research things, for good or ill. Good for
scientists, also good for stalkers and bullies:  https://www.buzzfeed.com/ryanhatesthis/trump-supporters-have-built-a-document-with-the-addresses?utm_term=.njMMODzlmO#.lbP60281J0

(4) Much less penalty for making obscure references. Time was, if I mentioned the Whorfian Hypothesis in passing, no one would get whatever point I was trying to make because they had no clue what I was referring to.  Now you can just click on the linked text and have it explained to you. 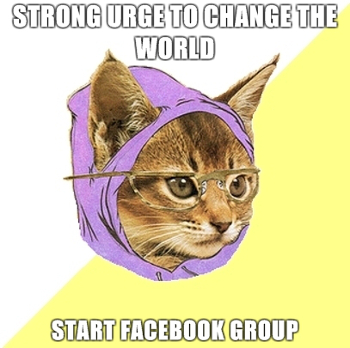 (5) Easy targeting & bubbling  This is the great power of Facebook, when people develop a habit of experiencing the web mainly through that one application. What you read, and who reads what you post, is mostly determined by Facebook’s algorithms.
.

Here are a few links to give you some background on the nature of discourse these days that I found entertaining:

Anyone baffled by Pepe?  These should explain:

A little timeline of some of its impacts, just off the top of my head:

1999 – Massive demonstrations and civil disobedience in Seattle break up the WTO conference, made possible largely by email, which had become widely used just recently.

2003 – Email likewise makes it easy to organize millions of people on the streets to protest the planned invasion of Iraq.  Authorities simply ignore, since nothing material is done to prevent the invasion, but information about what a fiasco the occupation becomes spreads pretty easily thereafter. 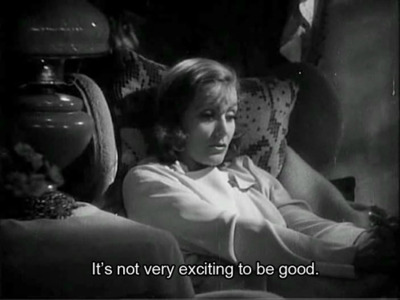 ●  As all the “developed”, and much of the not-so-developed world gets online, a style of communication arises in which people take advantage of relative anonymity to post the most offensive and irresponsible crap just for some little thrill.

●  The captioned picture (come to be called a “meme”) emerges as the primary way of conveying a thought in an easily digestible bite. 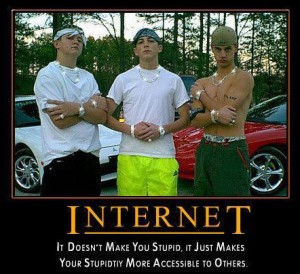 ●  It becomes a common practice for some people to post the most trivial crap about their own lives, taking up much bandwidth that could be better used trying to understand the larger world.

2008 – Obama is elected as the first “Facebook President”, taking advantage of the newly popular app, among other things, to organize and publicize his campaign.

2016 – Continuing a trend that’s been building for some time, niche echo chambers have arisen, making what were once extreme fringe opinions and willful hoaxes more accessible and more sophisticated, gaining more followers.  A proliferation of fake 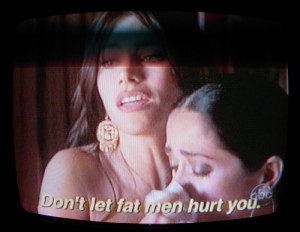 news, created by both partisans and people just seeking clicks, contributes chaos to information surrounding Clinton and Trump, leading to low turnout and Trump’s election.  It accomplishes little to show him as a gross, stupid slob when a large portion of the voters are gross, stupid slobs living in a bubble that agrees with him.

That last entry has me recalling one of the few things I actually learned in college (in a public opinion class):  that people who are subject to a lot of conflicting information tend not to vote. So it’s not enough to get your information published, it needs to have dominance somehow. It also means that the people who are most likely to be active are also most likely to live in an echo chamber.  I wonder whether the ease with which conflicting information gets around is likely to increase non-voting.

Ok, that’s about as far as I feel like going in my speculation right now. Just remember what followed Gutenberg and how long it took for any “Enlightenment” ideas that followed to gain any popularity. 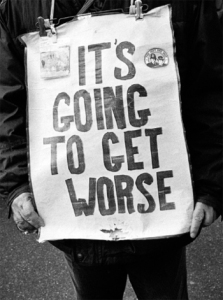 Comments welcome. Easy to give a fake name, if you’re tentative about it.

1 Response to Round Numbers Again